Trending
You are at:Home»News»Samsung unveils Galaxy Tab S2 for India
By Poornima Prakash on July 22, 2015 News

The iPad Air 2, Dell Venue 8 700 and Sony Xperia Z4 are no longer the thinnest tablets in the world. The three tablets lost the title of the thinnest tablet to the Samsung Galaxy Tab S2, which is set to be launched in August and measures 5.6 mm in thickness. In regards to screen size, consumers will be free to choose between a 9.7-inch screen and a 8-inch screen versions, with the former weighing 389 grams and the latter 265 grams. The two versions run on Android Lollipop 5.0 and sport a Super AMOLED display at a resolution of 2048x1536p, which is capable of showing 94% of natural tones according to the South Korean tech giant.

Powering the Samsung Galaxy S2 is a Samsung Exynos 7420 processor. This 64-bit Octa core processor comprises of two quad-core processors capable of speeds of up to 1.9 GHz and 1.3 GHz, backed up by 3GB of RAM. Consumers will be pleased with the 32GB and 64GB internal memory options available, which can be expanded up to 128 GB using a Micro SD. In addition to this, Samsung offers users with 100GB of Microsoft Office file storage capacity on Cloud through OneDrive, which is available for free for one year. 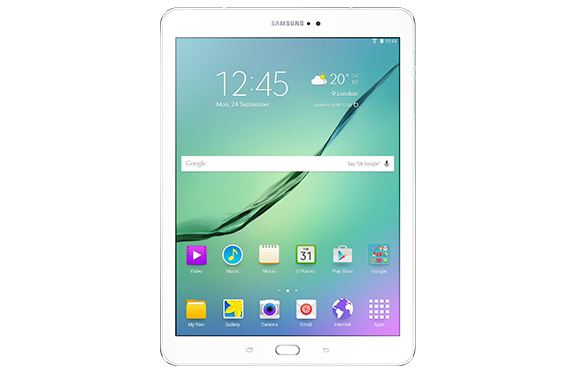 Similar to one of its closest competitors the iPad Air 2, the Galaxy Tab S2 is equipped with a fingerprint scanner and is available in both Wi-Fi and Wi-Fi and LTE versions and comes with Bluetooth 4.1 BLE. In keeping up with the front and rear camera trend, Samsung includes an 8 Mega Pixels rear camera with Auto Focus and a 2.1 Mega Pixels front facing camera. A 5,870 mAH battery keeps the 9.7 inch S2 version running while a 4,000mAH does the same for the 8-inch version. The Galaxy S2 gives users access to an assortment of productivity as well as superior viewing features, this is according to the president of the IT and Mobile Division of the South Korean conglomerate.