Trending
You are at:Home»Reviews»KUKABALL for iPhone: Game Review
By Poornima Prakash on July 5, 2015 Reviews

An Addictive, Classic game for iPhone users, which has once again delivered a classic of a game with KUKABALL. Fans of soccer games will of course love it but virtually every fan of any type of sport’s challenge games will enjoy it as well.

The perfect blend of backyard soccer and video game has formed into a great new app for the iPhone called “KUKABALL”. Kukaball is indeed simple in gameplay, but it cannot be helped to see just how much fun it is to play a goal kicker, who is out to knock as many goals past the Kuka as they can. The Kuka is an interesting looking character, who resembles what looks to be a traffic cone and garden gnome all-wrapped into one.

When you have arrived at the main screen of the game, you are just that much closer to trying to fiercely kick some soccer balls against the little cone shaped Kuka. Let it be known that the little guy puts up a good fight but once you get a hang of the game, he simply becomes worthy competition for you to enjoy playing against on your iPhone, anytime.

Once you have decided to start the Kukaball game, you will then see the game timer, which is set at exactly 45 seconds. As stated above, once you commence kicking balls against the Kuka, you need to start thinking quickly because that little guy will be on his game when he is facing new competition. However, in the 45 second time-frame, you will have the opportunity to kick as many goals as you possibly can and even though the concept is basic, it sure can be a lot of fun to help kill time with.

The ball is kicked when a player is flicking the ball icon on the touch-screen. You will be enabled to bounce the ball off the set of walls that are given but rest assured that the Kuka is going to try and do everything in his power to make a point of deflecting those attempts as much as he possibly can. Because of his inspiration to make it certain that you fail, players must be inventive regarding just how they kick the ball and the various maneuvers that need to be integrated in order to succeed.

You will be able mix a variable of moves to get the ball in the goal and you will also have the ability to dribble the ball utilizing minimal swipes and create a combination maneuvers to help you advance. In order to make a goal, you don’t need to kick the ball right away either, you can travel across the space you are given within your boundaries. Passing the ball isn’t any issue as well and there are always the sidewalls to use and when you get the ball back,you can have another chance to kick it again. 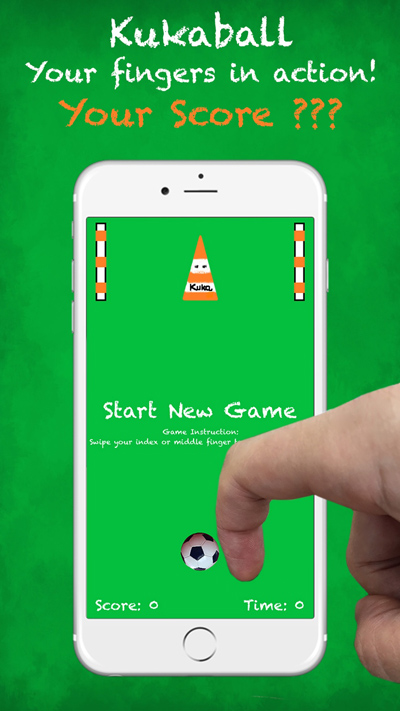 Another element that you can accomplish is to use the angle on the right side to kick at the wall in order to create a better opportunity to score. So, you have a great set of different skills that can be directed in helping you achieve success in the game.

When the time comes that the timer has expired at the game’s conclusion, you will be able to see the results of your final score. From there, as most app games do, you will then be offered to start a brand new game.

Give the Kuka a Challenge.